On May 16, 2015 I (Kristian Kabuay) was doing another festival with Ray Haguisan (Malaya Designs) and Joe Aquilizan (Bayani Art) in San Francisco, California where it was cold and slow. During the frequent downtime, we did what we usually do…talk about what we should do and the many roadblocks we face. The reality is that a lot of these are economic roadblocks but it’s about time we do something about it. Shots fired at MYSELF! About 2 years ago I had this idea of a Filipino Culture Conference about the same time I started my term as a board member of the Young Filipino Professionals Association. Ray and I even canvassed locations to host this damn thing. The concept was to combine an “academic” conference and a festival. I introduce, the Filipino unKonference as a start of something different. It’s my hope that others will create their own unKonference in their own community. Discuss.Disrupt.Disseminate.Do

As for the festival itself, it’s been following the trend of others where attendance and profits are down while booth prices have risen. With that reality, I’ll be doing less festivals and concentrate on producing my own events. Sisiklab is an example of what’s to come. Stay tuned 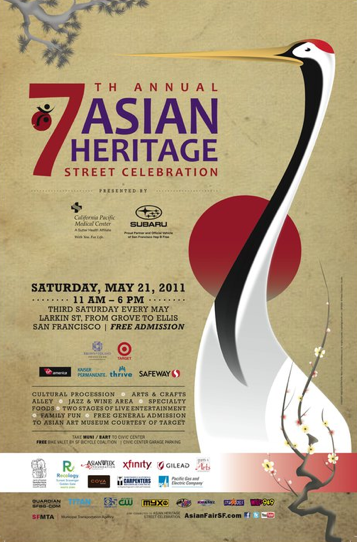 I’ll be at the Asian Heritage Street Celebration this Saturday 5/21 with Ray of Malaya Designs showing some artwork, translations, and eating some good food. Drop by the booth and say hi. Look for the Katipunan flags. FREE event

The 7th Annual Asian Heritage Street Celebration will take place on Larkin Street, from Grove Street to Ellis Streets. Landmarks include City Hall, the Asian Art Museum, and the lion pylons setting off Little Saigon at Larkin and Eddy. Fair-goers are encouraged to walk, bicycle or take public transportation.

The 5th Annual Asian Heritage Street Celebration was yesterday in downtown San Francisco. I had a booth along with Malaya Designs. It was our 1st non-Filipino event. I’d have to say that the reaction was comparable to Pistahan at Yerba Buena last year. As always, we did free name translations on stickers for everyone. Although people didn’t really buy much, it was great to meet people who “know me” online. I also spotted my work on an ankle. Oh yeah, thanks to Christine from Suku Art for the impromptu CBS interview.