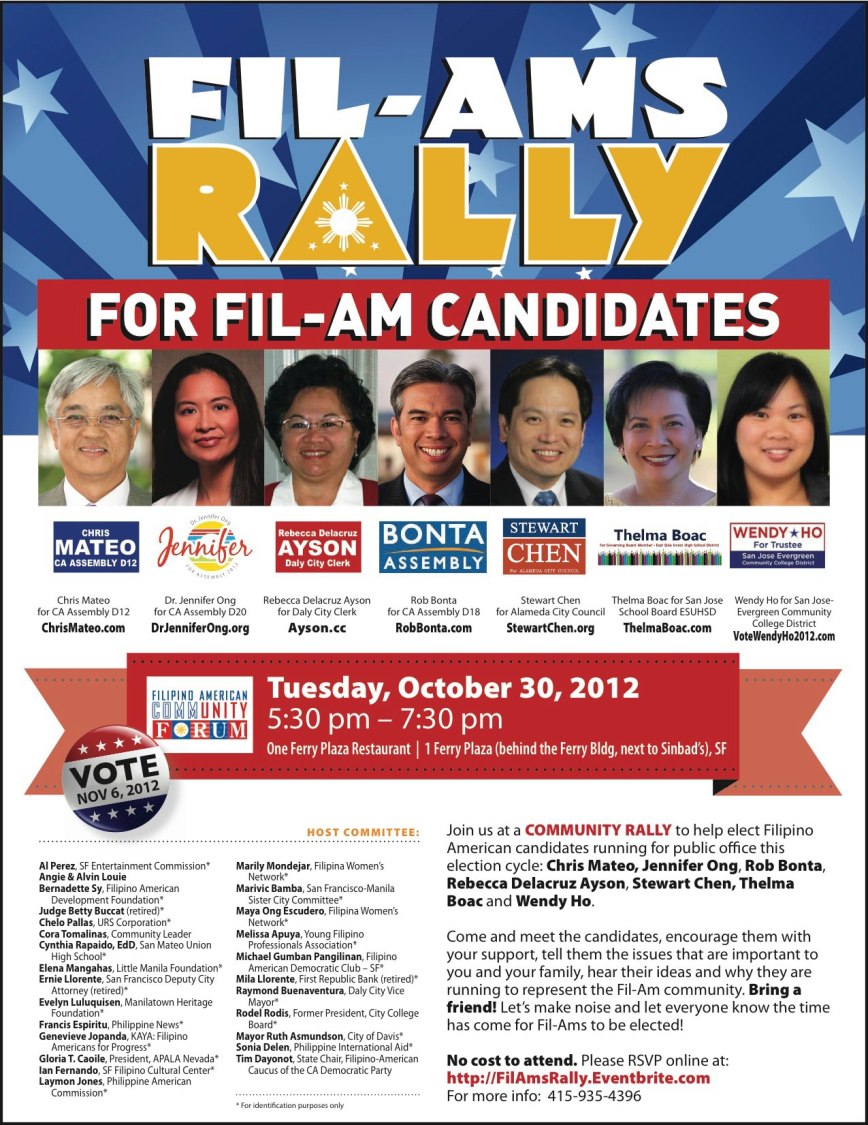 I don’t usually go to political events but I went to a rally for Fil-ams to confirm if my idea to use baybayin as a cultural identifier for businesses would also be applicable to politicians. After having pancit, fried chicken and a Carona, I spoke to some people in the audience, community organizers and a couple politicians. These politicians obviously want the support of the Filipino American community and specifically new young voters. The problem is how to identify as a Filipino without alienating others. It’s not a good idea I guess politically to say “Ryan Santos: Filipino” on a sign. People vote for people that they fell can trust to address their issues. Someone that speaks their language, literally and figuratively.

Below is the website of David Chiu. He uses a writing system specifically to identify him as Chinese and at the same time communicate to his target market.

In contrast, here’s the website below for Rob Bonta who’s Filipino.  The problem with Filipinos is that we are chameleons. We can look like virtually any race. Our last names can mistake us for Latin, Chinese, “American” or a handfull of others.

Fil-Am candidates should use Baybayin on their marketing materials to identify as Filipino. It does not have to communicate like David Chiu does because the reality is that the majority of Filipinos cannot read Baybayin (yet). However, the segment that Fil-Am politicians want to reach (young), do recognize it. Who will be the 1st Fil-Am politician to utilize Baybayin? Contact me and I’ll help you out.

By now you should know about the Philippine Cybercrime Law shotgun approach to stop online “crime”. Read about it here. While the act has some good basic things to protect against child pornography, spam and etc but most of it is vague and may lead to jail time for liking a supposed libel Facebook post. I’m not gonna go into all of the bad possibilities but I’ll talk about something deeply personal and how this relates to the work we as Baybayin advocates do.

If we criticize certain people in big business and the government about their attempts to destroy indigenous culture, we can now be charged with libel and punished. Regardless of our regional sentiments, all citizens of the Philippines should stand up to this new freedom stifling “cybercrime law”.

You may think that this law can’t affect Baybayin but it does because Baybayin is political and freedom of expression. Baybayin was at the forefront of our fight for freedom from the Spanish. Th Ka sign has become synonymous with Kalayaan (freedom). Everyone from rebel leftists to the Philippine military uses it.

One of the reasons Baybayin almost became instinct was because of politics. Current efforts to “revive” it is politics and with any political discussion come debate and criticism that can now be deemed libel.

Sure, it’s difficult to prove malicious intent, a key ingredient of any libel suite but anyone with money and a lawyer can force the supposed lawbreaker into an expensive and time consuming legal battle if they can afford a lawyer. This cybercrime law empowers those with power to harras those with little power.

Some of you may remember the Ticao stone news from last year where the Baybayin community from the US and Canada questioned if the stone was really ancient or not. After an article came out on GMA News, I wrote this piece as a response to UP Anthropology professors.

Could Barry be in trouble for his comments to the professors?

Hell, this whole post could land me in jail!

Ray Haguisan could be sued for libel for calling out a corporation for reposting a photo of an incorrect Baybayin shirt with stolen fonts from my website where I call out Kultura?

Mike Pangilinan calls out politician from Pampanga who use Tagalog. Can he get into legal issues for his criticisms?

Criticizing a company or government body for incorrectly using Baybayin could get you a lawsuit as I wrote about the Department of Budget and Management.

This law turns critics into criminals.

I’m not even going to get into the potential artstic limitations….

This also greatly affects the Baybyain National Script Act bill. This will be put on the back burner until this Cyberbullshit is taken care of.

Since I’m an American citizen, I should be untouchable right? Don’t know with the law written so vaguely even Mark Zuckerberg could be a criminal because he runs Facebook that’s the vehicle for committing these “crimes”. If I go home to the Philippines can I be arrested?

I’m supposed to be getting my Philippine citizenship so that I can be a dual but with this issue, I don’t know now. I’ll have to wait it out.

On a personal note, I took part of the protest and put up an image on the homepage but I’m saddened that it seems like there aren’t many pissed off Filams. The weird thing is that many of the older generation came to America due to the Marcos martial law. I’ve heard so many stories how bad it was. I think there could be a digital divide where that generation doesn’t understand the dynamics of the internet or they are just totally over the Philippines where they just don’t give a shit because they were scared for life. So I can understand that generation as to why they are silent on the issue.

What baffles me is the younger generation of Filams and Filam groups who are relatively silent on the issue. October is Filipino American month, now is a perfect time to talk about this issue. Is it because it doesn’t affect them? Are they wanting to stay in good standing with the local Philippine Consulate?

BTW, I’m just basing thing on what I’ve seen on Facebook. There were more posts about Jessica Sanchez on American Idol rather than Cyber-Martial Law and the loss of freedom. 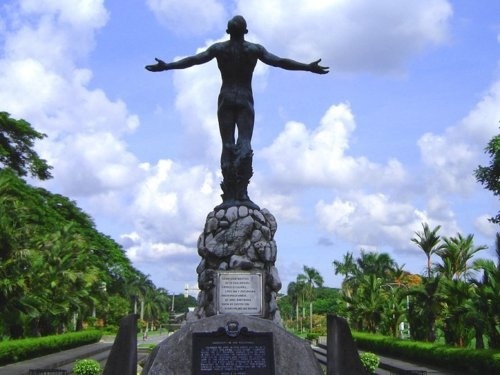 I’ll be taking part of a lecture/panel discussion at UP Diliman 7/25. Yeah, I know it’s last minute but that’s how it goes here in the Philippines 🙂

While the topic isn’t strictly Baybayin, I’ll inject it as much as possible since its about Identity and Culture.

TOPIC: Filipina/o American Identity and Culture: There Is More to Us Than Just The Immigrant Narrative
WHEN: 5:00pm-8:00pm, Wednesday, July 25, 2012
WHERE: GT-Toyota Asian Center Seminar Room, University of the Philippines, Diliman, Quezon City

One of my favorite Filipino American shirt companies just released their spring/summer collection around the theme of “No History, No Self”. The standout design is a skull version of the iconic Jose Rizal image with a unique Baybayin style saying “Walang kasaysayan Walang Sarili” literally translating to “No History No Self” in Tagalog. What’s also interesting is the usage of the X as the kudlit for the Da/Ra and La characters for the word Sarili. At 1st glance, one may confuse it as vowel cancellations (Virama) for the word above. What are your thoughts on this technique?

Every where you look we are presented with sun and stars, Filipino this, Filipino that, and every variation of Pacman you can think on a tee as “Pinoy Pride”. No substance, no history. The lack of accessible Philippine curriculum in schools, studies, and products inspired our “Death of Philippine education” theme for our S/S collection. We took an iconic Philippine image in Jose Rizal, but with a skull. Babayin/alibata (first written script of the Philippines) in our own handwritten script font translated “No History, No Self”.