First things first……Isn’t this Alibata? What’s the difference? Alibata was a term coined by Professor Paul Versoza mistakenly originated the writing system with Arabic. The first characters in the Arabic alphabet are ALIF-BA-TA. The “F” was dropped due to it rolling off the tongue better as Alibata rather than Alifbata. Baybayin comes from the root word Baybay meaning to spell. Baybayin literally means “To spell”.

“In 1921 I returned from the United States to give public lectures on Tagalog philology, calligraphy, and linguistics. I introduced the word alibata, which found its way into newsprints and often mentioned by many authors in their writings. I coined this word in 1914 in the New York Public Library, Manuscript Research Division, basing it on the Maguindanao (Moro) arrangement of letters of the alphabet after the Arabic: alif, ba, ta (alibata), “f” having been eliminated for euphony’s sake.” (source)

Baybayin and Alibata are the same thing except that Alibata is the wrong term. It’s also been called Sulat Tagalog and other names but Alibata has stuck. I don’t really care what people call it but the issue I have with the term is that when one Googles Alibata, you won’t get back good results. Some are outdated, recycled and flat out incorrect. In the late 90’s there was a contest organized by SEO Philippines to see who could be #1 in the search engines with the term Alibata. This caused a massive amount of low quality recycled websites. You’ll miss out on the cultural, historical and modern context.

The origins of the script can be traced back to India just like other languages and writing systems in South-East Asia. 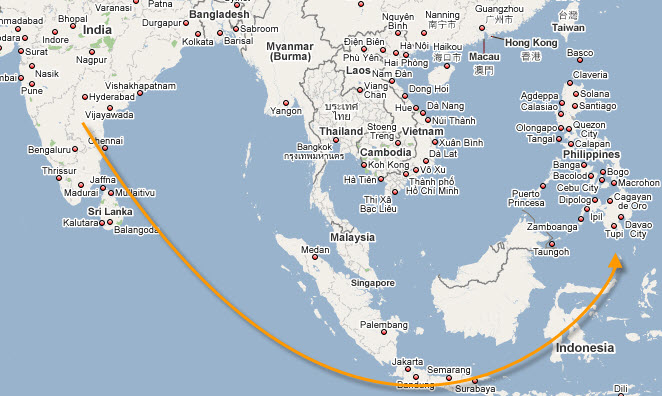 Two Filipino scholars, Tavera and Paterno, have concluded that about 25 % of the Philippine vocabularies can be traced to Indian influence. (source)

Baybayin was used to write short things such as poetry and announcements. It was carved in natural material such as bamboo and pots.

The death of the script
One popular train of thought of the demise of the script is to blame the Spanish. While it’s easy to blame everything on them, we probably have most our information about the script thanks to the Spanish. With the double-edged sword of knowledge preservation and cultural eradication, they helped keep the script alive by putting it in books and sending them abroad for safe keeping. The very first book printed (up for debate) in the Philippines contained Baybayin. The Doctrina Christiana was published in 1593 as a tool to convert the natives to Christianity. It worked.

There wasn’t any mass burnings of any Baybayin manuscripts. The fact that we wrote on organic material such as bamboo, severely shortened the lifespan of writings.

What probably happened was what occurs when a new generation wants to make money. The fact was that we were colonized. In order to adapt to this new society, one had to learn new things. One of them was a new writing system. Times were changing and the standards for literacy were different. Think of it like a generation who used the typewriter then needed to adapt to the new environment of computers. Young people wanted these new material goods (and illusion of power) that the Spanish brought in. The best way to get it was money. Money comes from jobs and jobs come from knowledge. Know how to read and write using the new writing system? You would have a better chance of earning a living. It’s still like that today. Don’t know English or how to write English? Pretty soon it will be “You need to know Chinese” to get this job or you probably will not make as much money as the next person who does. There’s a reason why the call-center industry boomed in the Philippines – English. One can argue that Baybayin died a natural death.