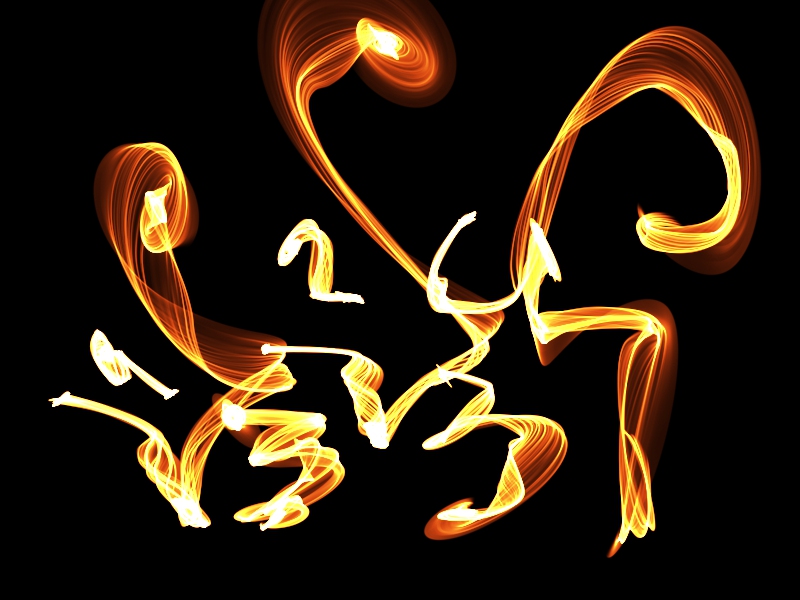 Come join us for Sisiklab (to spark) a celebration of activating our light through preFilipino tattoos, art, healing and music on 1/31 5-10pm at Ensoma 352 6th Street San Francisco, CA 94103 .

More info on the FB event 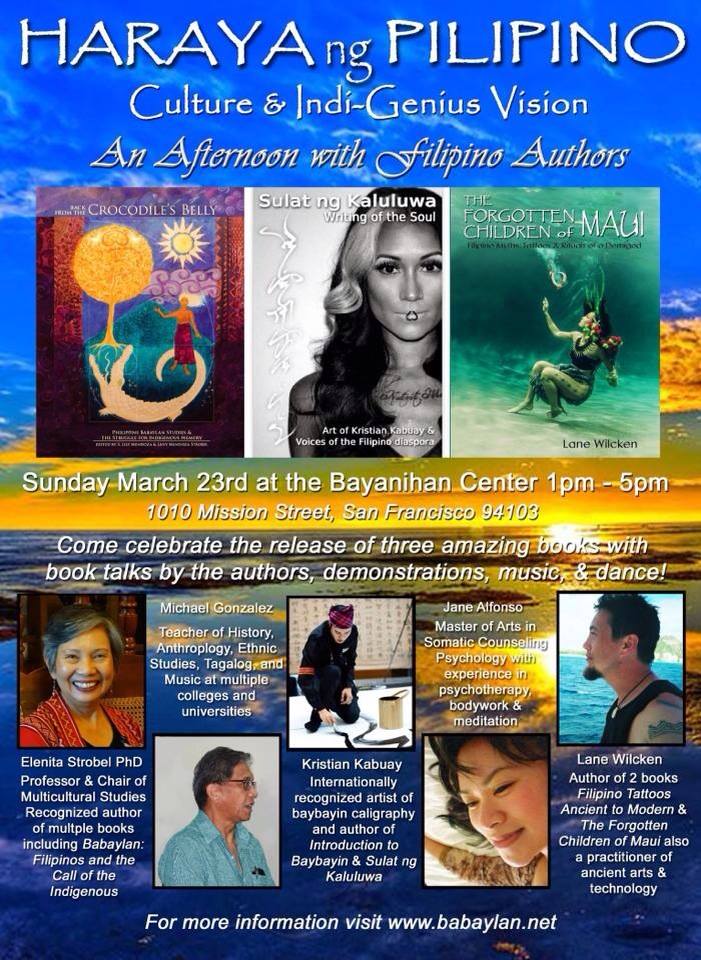 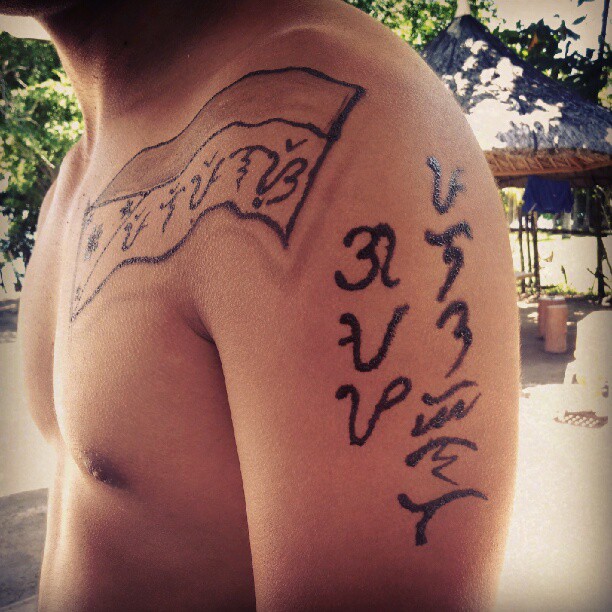 Here’s a photo I spotted on Instagram. It’s supposed to say Jay Fluent (I assume it’s a rap name). Made me laugh when I saw it. Incorrectly use Baybayin and it could change the meaning of your tattoo. Usually if someone screws up the spelling, it’s just a bunch of random letters meaning nothing. However, if your luck (or unlucky), it could spell something else. What this dude has on the right side is Falauenata for Fluent and on the left it’s supposed to be Jay but is written as Gaaya (could mean to Copy). If he’s wanting each character to be a letter, Falauenata would be Fluent but then that would mean that Gaaya would be Gay. I don’t know if he’s gay or not but I don’t think he wanted that.  If would be awesome if he was though. At least it’s a henna tattoo. Looks like it was done in a beach in the Visaya area. Maybe Boracay? You can tell by the way Pilipinas is written on his chest. The S has a kudlit checkmark  above and below the character to cancel the vowel.

Komikon was this past weekend in the Philippines. Baybayin was spotted at one of the tables 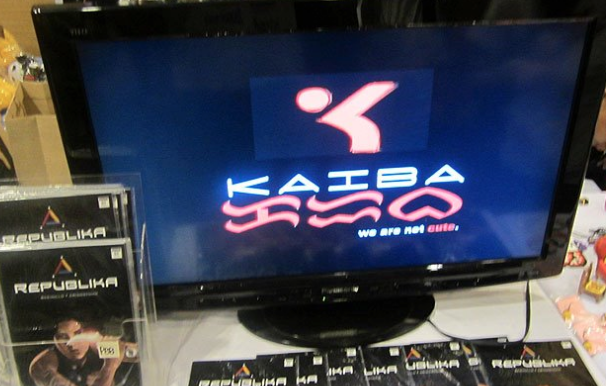 Kali – An Ex-Marine Special forces. KALI keeps a secret amulet, believed to be very powerful and can deflect blades and bullets, He is a born leader and always soft spoken. KALI has been injured and shot several times in battle, but his wounds almost always heal faster than the others. He is extremely strong and agile. Kali is being sent to head a special mission to the Spratlys. 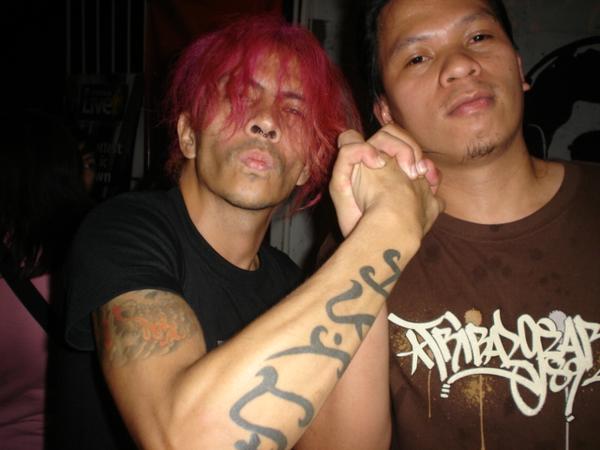 Just learn on Facebook (where I get all the important news) that Pinoy Rocker Karl Roy died. Having watched Karl perform numerous times, the man did things his way with no apologies. Karl Roy also helped promote Baybayin with his band, Kapatid by using the Ka character in their logo as well as tattoos. RIP Karl

Nathan Azarcon is featured in the latest issue of Uno Magazine Philippines. Here’s a nice photo of his Kapatid Baybayin tattoo. For those that don’t know, he used to be in one of my favorite bands of all time – Rivermaya.

I setup a dedicated website for my Baybayin documentary at BaybayinFilm.com as well as a Facebook page.

1st of all, I think it’s cool that Baybayin is on a MAJOR clothing company like Affliction but unfortunately, there are a few issues. Here’s Affliction’s Signature Series shirt of Brandon Vera. The front has an eagle and “The Truth”. The back is where it get’s interesting where there are 4 Baybayin words that are tattooed on Brandon’s back. They represent the 4 elements Earth (Mundo), Wind (Hangin), Water (Tubig) and Fire (Apoy). Starting with the tattoo, Earth should probably be “Lupa” as in dirt. Mundo while conversational Tagalog (Spanish rooted) for world/earth. When your speaking about the element earth, I believe one means dirt not the planet Earth. Also the Ma character in Mundo is missing a kudlit that would make it Mu. The tattoo actually says Mando. Easy fix though.

Now to the shirt. The graphic below is a screenshot of the back. Besides being out of order as it s on Brandon’s back, there are some inconsistencies in kudlit writing. I think it’s fine in handwriting and even in art but for a commercial shirt, it should be uniform. 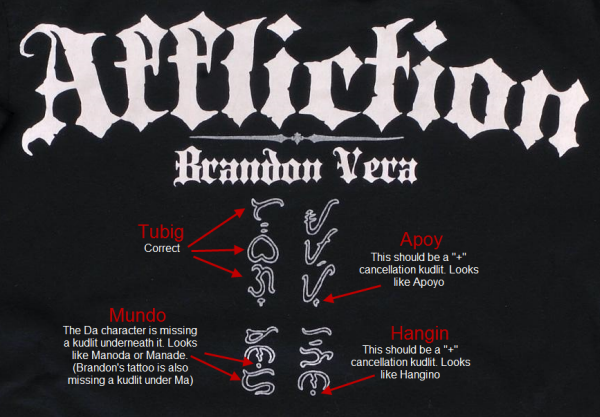 Tubig (Correct)
The characters written are Tu-Bi-G. Notice the cancellation kudlit under the last character. Without the + kudlit, it would read as Tubiga.

Apoy (Incorrect)
Looks like the characters written are A-Po-Yo. It should have a + just like the Ga character in Tubig. If using cancellation + kudlits, it’s important that you make sure they look different than your traditional kudlits.

Mundo (Incorrect)
Besides the Lupa and Ma tattoo issue I mentioned earlier, this also has the + issue but this time for the 2nd character Na. The last character looks like it was combined with the kudlit. With the + kudlit and DA errors, it looks like it says Manoda or Manade.

Hangin (Incorrect)
Again, the last character is missing the + kudlit. Now it looks like Hangino.

What sucks is that some people will probably get those wrong words tattooed. How did this happened? Probably the designer found a photo of Brandon’s back online and just reworked it and didn’t bother to research or ask around it it was correct or not.

Check it out at Affliction Clothing

It’s summer and time to show off your tattoos and abs.  Here’s some work I’ve done for hot bodies.

Kat Longa (Playboy model)
She liked the look of modified Baybayin on her back even if I tried to get her to go with traditional. How could I say no? Below is a photo of her wrist that says Ate (sister).

END_OF_DOCUMENT_TOKEN_TO_BE_REPLACED 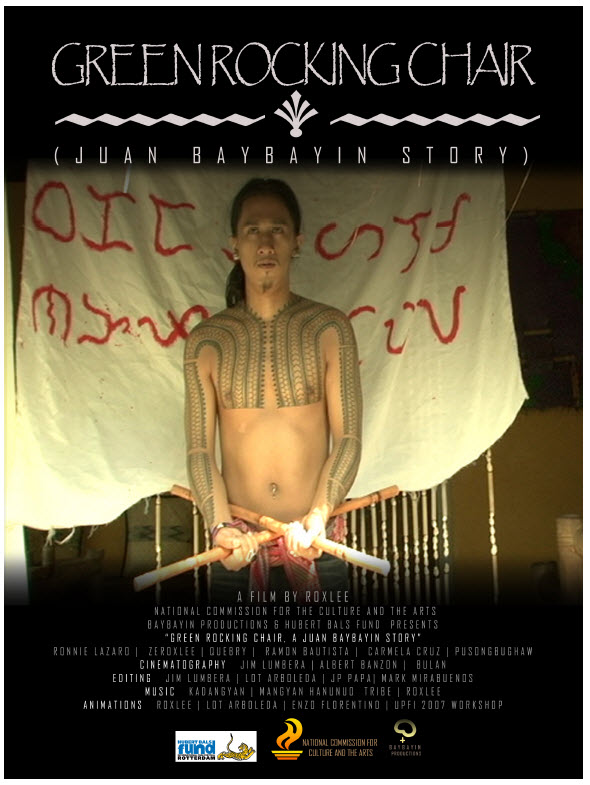 Came across this documentary today. I badly want to see this. Too bad it’s not on DVD yet. It was released 2008 in the Philippines and directed by Roxlee.

The filmmaker’s personal search for Baybayin or Alibata, the original Filipino writings before the Spaniards came and colonized the Philippines in 1521. The search will determine of such ancient alphabet still exists and practices all over the archipelago.