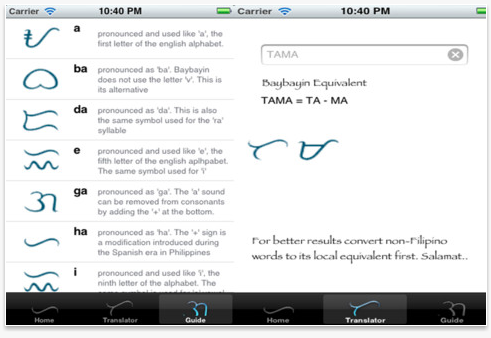 Developed by Marlon Jose Masbad. A Google search shows him as a developer from Singapore.

1) Home: Main page intro
2) Translator: Enter your word and the output breaks it down
3) Guide: List of the characters with some information

It appears to be based on the very popular Eagles Corner translator. Notice the use of Paul Morrow‘s fonts.

What I find interesting is the note:

What he’s trying to avoid or tell the users is that you shouldn’t enter “Strength” and expect it to output correctly. It’s a problem all “translation” applications have, including my own Baybayin App. Trying to guide end users without personal presence has always been a challenge. Ideally, the user should do research on their own but due to the lack or minimal resources they will not. Is it up to developers to show them the door and let them walk in or do we need to carry them?

I tried out the app on my iPad on IOS5 and the Baybayin characters don’t output. It also is sensitive to spaces.

This is FREE from the Appstore. Check it out