Christian’s life experience proved the lie to the statement. At his Malcolm X phase, he found a Katipunan flyer in his parents’ old textbook. What beckoned to him was the strange alphabet. They were not geometric, resembling curlicues of Thai or Arabic writing. But he put it off. After graduating from John F. Kennedy High in Fremont, he moved back to the Philippines. He flew back to the States in 2003 with a BSBA in Management. But art still consumed him. Now a web analyst for a retail company, the Internet gave him a tool to probe deeper into the strange alphabet he never forgot. 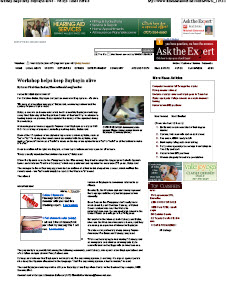 “We’re out here trying to find identity,” Cabuay said as immigrants and children of immigrants try to reconcile their old heritage with an American one.

The popularity is especially felt among the tattooing community, said Cabuay, who sports a few Baybayin tattoos and offers tattoo designs at http://www.PinoyTattoos.com.

The spidery 17-character alphabet is often called “alibata” after the Arabic alphabet because it was once thought to be of Arabic descent, sad Christian Cabuay, who manned a Baybayin booth and had his name written in the script on hi nametag.

Christian Cabuay of Walnut Creek, founder of PinoyTattoos.com, is fluent in a Filipino script called Baybayin. Although he is not a tattoo artist, his artistic skills and in-depth knowledge have made him a go-to guy for one-of-a-kind Baybayin designs suitable for body art.

Baybayin, a writing system used in the pre-Spanish colonized society of the Philippines, uses specific characters for certain sounds as do other Asian languages. It has been popularly referred to as Alibata, but Cabuay says that isn’t the correct term.