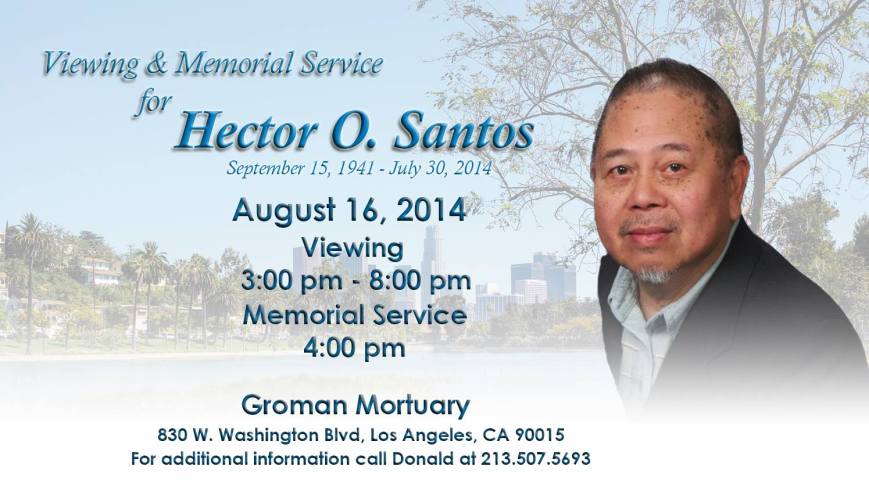 We lost one of the pioneers of Baybayin the other month. Hector Santos passed away July 30, 2014. Hector along with Paul Morrow were one of the firsts to publish legit information about prePhilippine scripts on the internet back in the mid-90’s. I remember the first time I came across Hector’s website. I was living in the Philippines going to school when the internet came out. I used to buy these month old reggae magazines and started to see websites advertised. I wrote all these down and once we got the internet, I looked them all up. I then came across the Yahoo search engine and searched for things like Filipino History, hip hop, buddhism, and the Philippine script. I was surprised to come across “A Philippine Leaf” by Hector. Blew my mind. I didn’t find any of this info in books for years. This kickstarted my deep interest in prePhilippine culture. At that time, he used to have fonts that were on floppy discs for sale. By the time I was able to order them in the US, he advised me that they were sold out and not sure if he would be making another batch. I’ve bugged him about once a year for an interview either in person (he lived in LA) or via email. Never heard from him. Because his website is so invaluable and we don’t know how long it will last, I’ve downloaded the contents and mirrored them at www.bibingka.baybayin.com. Here’s a direct link to his bio.

Bayani Mendoza de Leon past away about a year ago and I actually just heard about his death a few months ago while doing a google search. My first exposure to Bayani was his book, Baybayin, the Ancient Script of the Philippines: A Concise Manual in the 90’s I purchased at a festival. It was the first time I thought about modern ways to write the script. This then lead me to look at his resources and even finding a copy of his uncle’s book, from 1972  “Pinadaling Pag-aaral ng Katutubong Abakadang Pilipino by Ricardo Mendoza. Unlike Hector, Bayani was very open to being interviewed. We exchanged several long emails that culminated in what it looks like is his only interview about Baybayin that can be read here. Too bad I didn’t have the opportunity to go down to San Diego to interview him for my upcoming documentary.