There have been a few attempts to alter the original Baybayin for modern use. One of the first attempts to “reform” the Baybayin was in 1620 when Fr. Francisco Lopez was about to publish the Ilokano Doctrina. Seeing the “limitations” of Baybayin, he invented a new kudlit in the shape of a cross. When placed under a consonant, it would cancel the “a” vowel after the consonant.

I personally don’t like it due to it’s colonial origins and overall artistic look but I do see the purpose of it putting my cultural preference aside. If you look at Baybayin as purely a writing system, this mutation is a natural process. Thanks a surge of Baybayin tattoos, the Spanish kudlit has made a comeback due people wanting a “complete” translation. One common Baybayin tattoo is the Tagalog word for STRONG – LAKAS. Using traditional Baybayin, it would be written like this dropping the SA character:

Using the Spanish kudlit, it would look like this with the S:

Besides the Spanish + kudlit, I’ve seen an X and backslash after the glyph used as illustrated below:

Another technique I’ve seen is a kudlit above and below the character as seen here. Interesting but can be confusing depending on the direction you write. The backslash kudlit is one of the many additions to the script championed by Bayani Mendoza de Leon. He released a great Baybayin manual full of instructions and history about the script. While it does cover basic Baybayin, a lot of it is his proposal of a modern script with new characters.

Baybayin: Ancient Script of the Philippines: A Concise Manual published by Bycynthium treasures 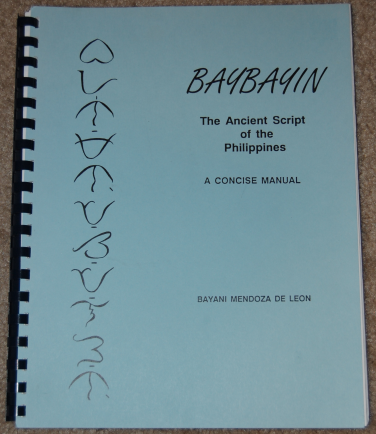 In addition to the backslash kudlit, the manual also goes into great detail on the O vs U & E vs I issue. This looks to resolve some of the guesswork that’s needed in order to read Baybayin.

Also covered are consecutive similar vowels and consonants, silent consonants and added consonant letters. Below is a scan of the expanded Baybayin from page 46 of the manual.

Nordenx is also doing some interesting work on expanding Baybayin using hollow and solid kudlits to differentiate between E/I and O/U.